You are here: Home / More Topics >> / The Innovators / The Principles of the Haddaadiyyah Mail to a Friend • Printer friendly

In the previous two articles in this series (see here and here) we established that Yahyaa al-Haddaadi stated - upon what he himself claimed to be authentic, sound historical reports - that the Companions participated in the murder of Uthmaan. This was in the first edition of his book (أحكام الجمعة وبدعها). When he began to be criticised for this, he went through a series of stages which indicate and prove his lying, deception and treachery and that he is not to be trusted in matters of knowledge and belief. This is the same as what was done by Abu al-Hasan al-Ma'ribee in the issue of his labelling the Companions as "scum" (Ghuthaa'iyyah), and he also went through a series of stages in which his deception and treachery became apparent. The summary that follows below is taken from a lengthier article written by (مصطفى بن محمد مبرم) Mustafaa bin Muhamad Mubrim, which you can download right here.

So here are the five stages:

The First: This is the stage where al-Hajuri accuses some of the Companions, with firm conviction (upon the claim of using only that which is authentic) that they participated in the murder of Uthmaan (radiallaahu anhu). The first two parts in this series (see here and here) make this absolutely, undeniably clear. Here is the proof, after mentioning his accusation against the Companions (amongst a list of other things he mentioned) he says: 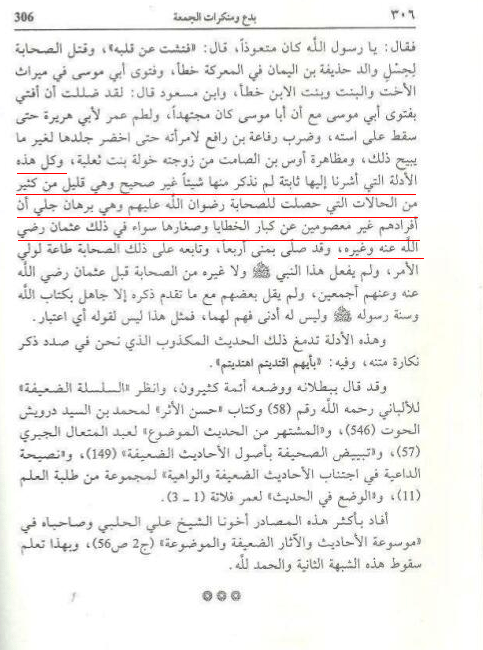 The underlined part reads, "And all of these evidences which we have pointed to, we have not mentioned anything except that which is saheeh (authentic), and these are just some of many situations which occurred from the Companions (may the pleasure of Allaah be with them), and they are a clear evidence that as individuals they are not infallible from making grave mistakes or minor ones, whether that is regarding Uthmaan (radiallaahu anhu) or other than him."

So whoever denies that this is firmly established from al-Hajuri in his own writing, publishing and distribution is a dumb ignoramus or a person of desires.

The Second: In the second stage, al-Hajuri began to flee from being followed up and began to label this as a crime (i.e. that he should be followed up and investigated in this matter) and he began to throw the blame upon the Scholars (like Ibn Katheer, al-Dhahabi, Ibn Hajar, Ibn Sa'd and others), making it appear that this is what they mentioned and he merely spoke on the basis of that. We addressed this in the second part to this series, focusing on his lies against Ibn Katheer (rahimahullaah). In this stage he began to claim that because there are certain reports (which he deemed to be authentic and sound in his first stage) that came from these Scholars, then all he did was to relay what was apparent from them, while it was those scholars who mentioned them. These reports concerned Muhammad bin Abi Bakr and his alleged participation in the killing of Uthmaan. However, as we have established, this claim about him is incorrect in any case, and this is indicated by the likes of Ibn Katheer too - from whom al-Hajuri is claiming to reference (amongst others) as the origin of his claim.

The Third: In the third stage, al-Hajuri began to display a type of [feigned] confusion, where he says that there are many reports (regarding Muhammad bin Abi Bakr and his alleged participation in the killing of Uthmaan) which are taken as true because of their popularity or because they are found in a particular book but then you find that some scholars reject the report, so al-Hajuri displays a type of uncertainty in the matter.

The Fourth: In the fourth stage, al-Hajuri shows a type of concern, love and affection for the Companions in the course of being asked about his reviling some of them, whilst ignoring the thing for which he has been criticised for in the first place. When asked about his accusation against Uthmaan bin Madh'oon (that he initiated the bid'ah of al-Irjaa') al-Hajuri retorts, "By Allaah I am not a Raafideee! All of Ahl al-Sunnah know that I am a Sunni, and I am not from the reckless Ikhwanis who show boldness against the Companions of Allaah's Messenger! Refuge is with Allaah, my flesh, blood and honour is a ransom for the Companions of Allaah's Messenger." This is his answer, however that is not the issue, you haven't addressed the actual issue of you reviling them and slandering them with what they are free of. This is the type of evasion that was found with Abu al-Hasan al-Ma'ribee and is a trait of the Innovators in general when they are asked to provide answers for their misdeeds and crimes in matters of knowledge.

The Fifth: In this fifth stage, we see al-Hajuri (the alleged "Imam of the Thaqalayn") making some stealth underground moves when he republished another edition of his book (in 1431H) where he removed this section from his book without any clarification or repentance and without any explanation as to why he removed that section.

What indicates the seriousness of Yahyaa al-Hajuri's accusation against those Companions is that the Messenger of Allaah (sallallaahu alayhi wasallam) is authentically related to have described those killers of Uthmaan (radiallaahu anhu) as munaafiqeen (hypocrites), and here is the proof:

It was related by Imaam Ahmad in al-Musnad (6/86), Shaykh Muqbil (rahimahullaah) said, "This hadeeth is saheeh upon the condition of Muslim" (as-Saheeh al-Musnad mimmaa laysa fee al-Saheehayn 2/501-502), and al-Tirmidhi related it and said, "Saheeh upon the condition of Muslim" and the hadeeth has also been related by Ibn Maajah (1/41), from Rabee'ah bin Yazeed from Nu'maan bin Basheer. And Shaykh al-Albaanee declared it saheeh as occurs in "Dhilaal al-Jannah Fee Takhreej al-Sunnah" (p. 559).

As such, the accusation of al-Hajuri is tantamount to ascribing hypocrisy to those Companions, which in turn would explain why al-Hajuri has gone to such lengths in order to deflect this issue from himself, a sign that he is not trustworthy and not honest and is certainly not in the ranks of the genuine scholars.