You are here: Home / More Topics >> / The Innovators / The Principles of the Haddaadiyyah Mail to a Friend • Printer friendly

Yahyaa al-Hajooree is a the leader of new wave of al-Haddaadiyyah known as the Hawaajirah which has emerged to cause splits amongst the ranks of Ahl al-Sunnah. Like al-Haajooree, they display vile, foul speech, have errors in understanding the usool. Consequently, they err in implementing the usool of Ahl al-Sunnah when it comes to dealing with Ahl al-Sunnah, their ijtihaads, and their mistakes. Al-Hajooree has spawned a movement of mostly young, ignorant, charged-up youths who are deceived by the small amount of knowledge they have acquired into thinking they have reached the status of being able to mock, revile, abuse and speak ill of major and senior scholars. When it is the case that the Messenger of Allaah, (sallallaahu alayhi wasallam) and the Companions (radiallaahu anhu) are not free from the tongue of al-Haajooree, then it is unlikely that his followers will have any shame in attacking those less than them, the Scholars of Ahl al-Sunnah.

Below we present proof that al-Hajuri has slandered and reviled some of the Sahabah by accusing them of participating in the murder of Uthmaan (radiallaahu anhu) - a grave and serious accusation - for which he needs to bring proof or make clear open tawbah. The historical record shows that none of the Companions aided or supported or were involved with the criminals who were behind the murder of Uthmaan (radiallaahu anhu). 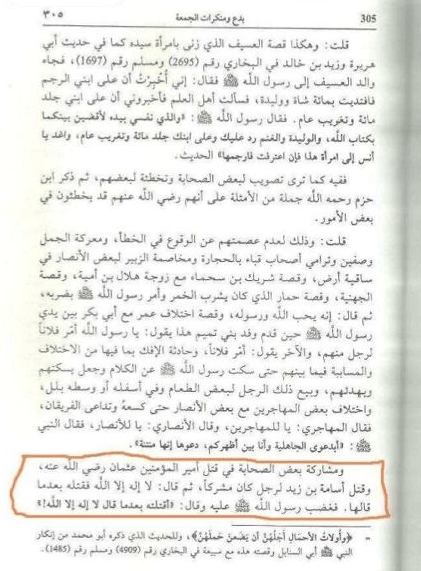 Yahya al-Hajuri: The Sahabah Participated in the Killing of Uthmaan (radiallaahu anhu)

From al-Hajuri's Book (أحكام الجمعة وبدعها), "The Rulings of al-Jumu'ah and Its Innovations", in the chapter (بدع ومنكرات الجمعة), "Innovations and Evils (taking place on) Jumu'ah)" al-Hajuri makes a casual remark at the bottom of page 305:

"And the participation of some of the Sahaabah in the killing of Uthmaan (radiallaahu anhu)..."

This is a clear revilement of the Sahaabah and is a falsification of history and is also fuel for the Raafidah. However, al-Hajuri's deviations do not stop here. He has also accused one of the Companions as being the founder of the bid'ah of al-Irjaa'. This will be documented in a separate article inshaa'Allaah.