Shaykh Ibn Uthaymin and the excuse of ignorance 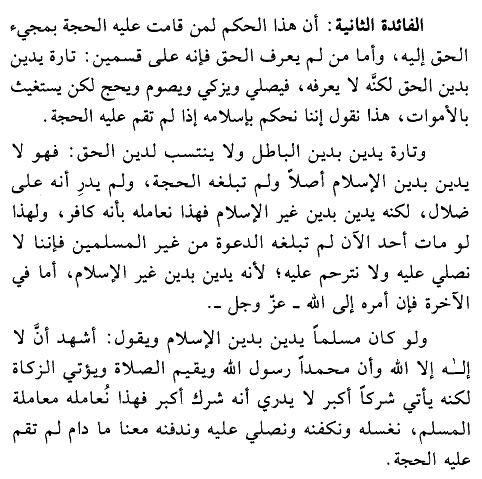 The second benefit: That this judgement is for the one upon whom the proof has been established by the truth coming to him. As for when he does not know the truth, then he is (one of) two types (of people): He could be following the religion of truth, but he does not know it, so he prays, gives zakah, fasts and and makes Hajj, but he seeks rescue from the dead. We judge this one with Islam when the proof has not been established upon him. And he could be following a false religion and does not ascribe to the true religion, thus he does not follow the religion of Islam to begin with and the proof has not reached him and he does not know that he is upon misguidance. However, he follows a religion other than that of Islam. This one is treated by us as a disbeliever. Thus, if anyone died now from the non-Muslims and the da'wah of Islam had not reached him, then we do not pray over him, nor do we ask for mercy for him because he follows a religion other than Islam. As for the Hereafter, then his affair is with Allaah, the Mighty and Majestic. And if he had been a Muslim, following the deen of Islam, and says, "I testify that none has the right to be worshipped but Allaah and Muhammad is the Messenger of Allaah" and establishes the prayer, gives zakah but brings major shirk, not knowing it is major shirk, then we treat him as a Muslim, we wash him, shroud him, pray over him and bury him with us so long as the proof has not been established upon him.

Note: The new wave of extremist Haddadis, from them Abdullah al-Jarboo' treat the above saying as being worse than the position of Jahm bin Safwan in the issue of imaan and consider this as a defence and aid of the deen of the mushrikeen and to be a revival of the ways of Dawud Ibn Jarjees (grave worshipper refuted by the grandsons of Shaykh al-Islam Ibn Abd al-Wahhaab).