Shaykh Saalih al-Fawzaan reviewed the book of Shaykh Rabee', "Manhaj al-Anbiyaa Fee al-Da'wah Ilallaah" and made a remark upon a statement of Shaykh Rabee' where he was speaking about ignorant people falling into Shirk (such as in places like India), having been affected by the Mushriks. Here is the page: 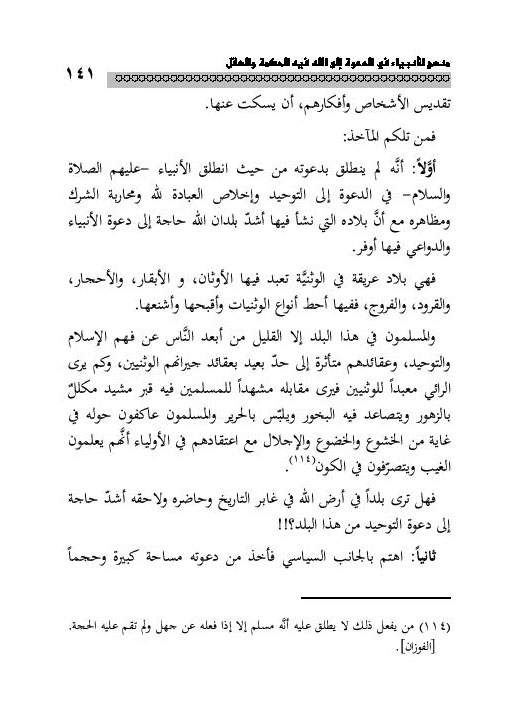 Shaykh Rabee explains that in these lands (where many of these politicians emerge with their political da'wah) the people are steeped in Shirk, and the majority of the Muslims are far away from understanding Islam and Tawheed. That they are affected in their beliefs by the mushriks whom they have been living with, and you will see Muslims, just like the mushriks in their lands, having their own idols (tombs), covered in silk, decorated with flowers and burning incense, flocking around it with humility, awe, veneration, alongside their belief that the Awliyaa know the unseen and control the creation. Upon this Shaykh Saalih al-Fawzaan commented:

Whoever does this is not to be labelled a Muslim unless when he does this out of ignorance and the proof has not been established against him.

The Shaykh does have other speech that suggests the excuse of ignorance does not apply (in matters treated as "known by necessity" or "through conveyance of the Qur'an" etc.), however the intent here is to show that this view has been held by the Shaykh (and that there is differing about it between the Scholars) and this is a silencing of the Haddaadiyyah who are using this issue to ascribe Irjaa' to many of the Salafi Scholars who affirm the excuse of ignorance and they include Scholars of Tawhid from Najd in what has passed and likewise the contemporary Scholars, al-Albani, Ibn al-Uthaymin, Abdul-Muhsin al-Abbaad and so on.

These Haddaadiyyah have now openly started speaking against Scholars such Ibn Taymiyyah, Abd al-Razzaaq al-Afeefee, Ibn Baz in whose statements there can be found what amounts to the excuse of ignorance for those falling into Shirk.