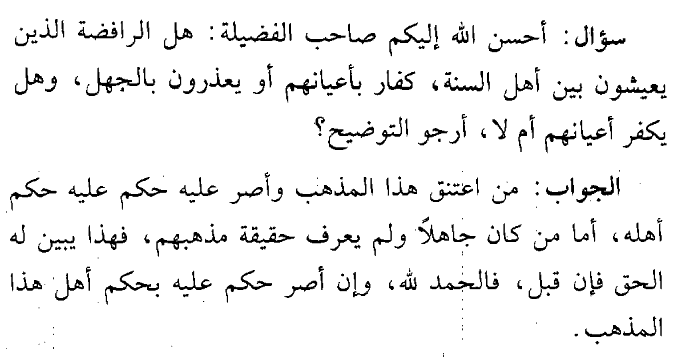 Question: May Allah be benevolent to you, possessor of excellence, are the Raafidah who live amongst Ahl al-Sunnah disbelievers as individuals or are they excused due to ignorance? And are they declared disbelievers specifically (in person) or not? I wish for clarification.

Answer: Whoever adopts this madhhab and persists upon it he is judged with the judgement upon the group (as a whole). As for the one who is ignorant and does not know the reality of their madhhab, then the truth is explained to such as one, if he accepts, then all praise is due to Allaah and if he persists, he is judged with the (same) judgement of the people of this madhhab.

The Shaykh does have other speech that suggests the excuse of ignorance does not apply (in matters treated as "known by necessity" or "through conveyance of the Qur'an" etc.), however the intent here is to show that this view has been held by the Shaykh (and that there is differing about it between the Scholars) and this is a silencing of the Haddaadiyyah who are using this issue to ascribe Irjaa' to many of the Salafi Scholars who affirm the excuse of ignorance and they include Scholars of Tawhid from Najd in what has passed and likewise the contemporary Scholars, al-Albani, Ibn al-Uthaymin, Abdul-Muhsin al-Abbaad and so on.

Parts of Speech in Arabic Grammar