Following the posting of the article on Shadeed Muhammad's reproduction of arguments used by Haatim al-Awnee (see here) to justify the bid'ah of demonstrations and protests as a means of social change and addressing injustices, the following screenshots of tweets were sent to me in which Shadeed uses threatening language and treats the issue of his mistakes in religion as if it is just a game centered around his ego. 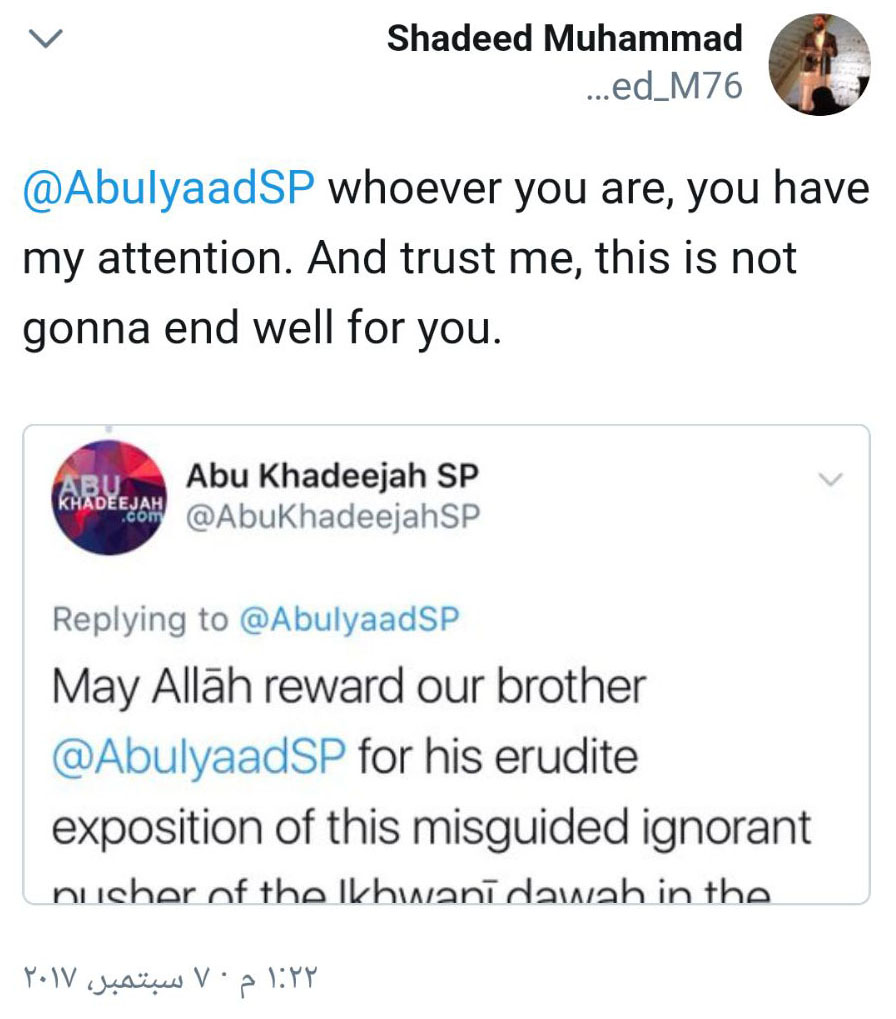 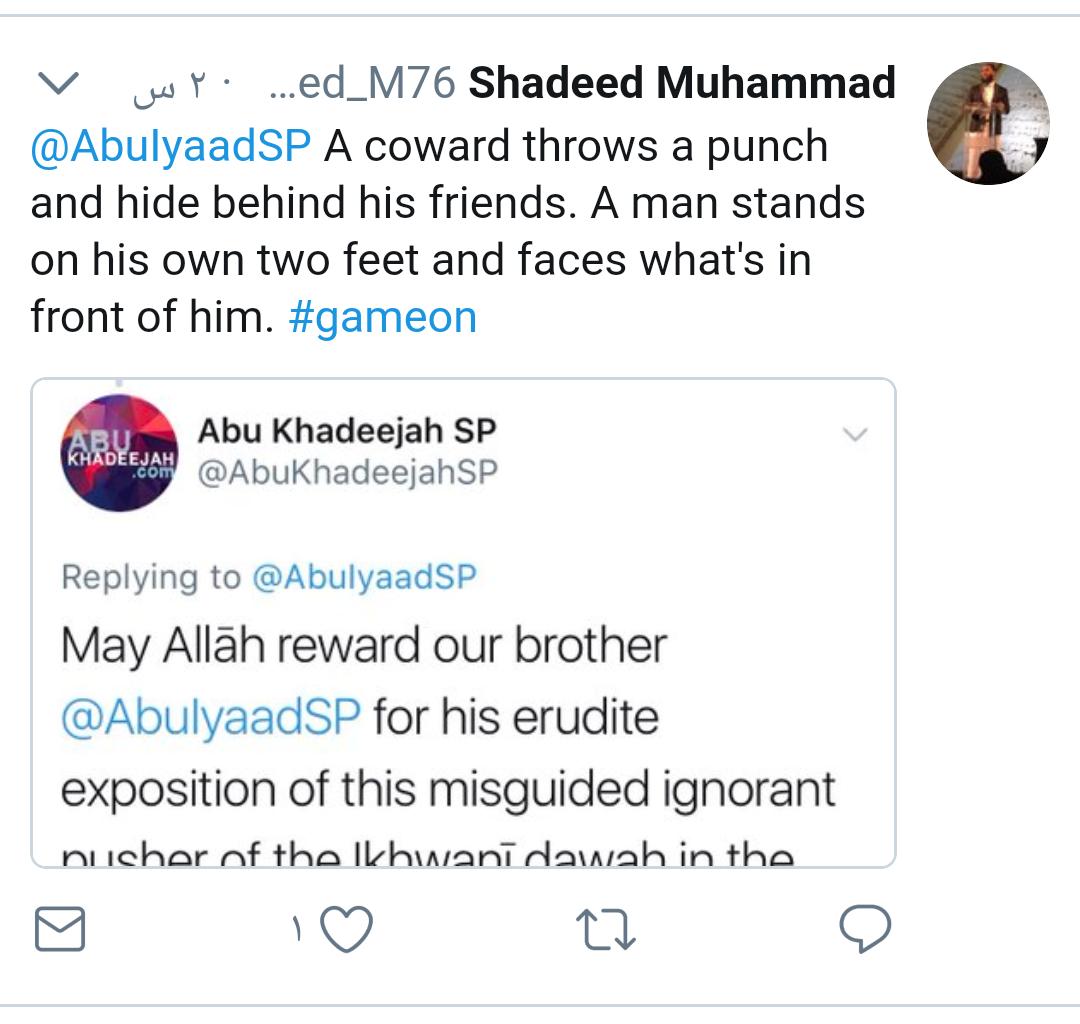 We shall address the content of these tweets in this article, but before we do that, we need to provide some background to our response, and for this we turn to a clip in which Shadeed Muhammad speaks of the Prophet (sallallaahu alayhi wasallam) as 'an alpha male' and also speaks of himself as "we [alpha males]." To describe the Prophet with this term "alpha-male" is not befitting and reduces him from his lofty, noble, humble, upright, truthful character. 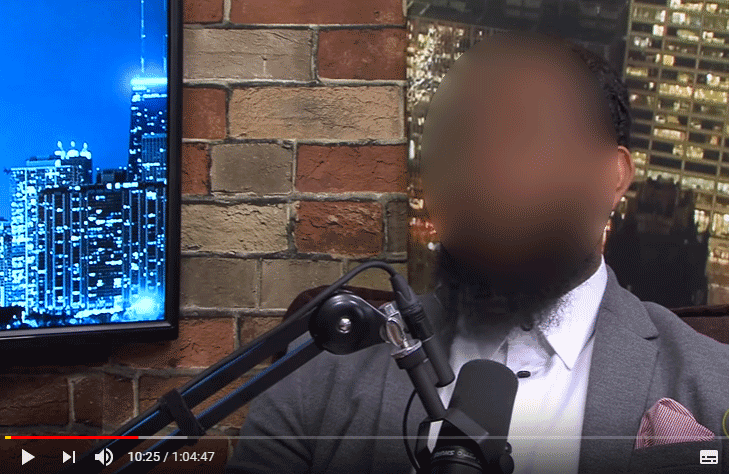 In a video interview published 8 August 2017, the subject of which is polygyny (a male having more than one wife) Shadeed speaks of love and how it operates on its own frequency and as an emotion, it is not supposed to make sense. He quotes Shakespeare, "Vain is the person who believes that emotions are supposed to make sense" and he mentions this in the context of a non-Muslim woman (female singer, rapper) who said that, in order to keep her partner (a stand up comedian and actor), she would be willing to accept him having another relationship, because of her love for him . He then speaks of love as a weakness, a vulnerability and how it requires you to let your walls down and how people keep the walls up, put on a facade, an outer show, with which their partner falls in love, instead of the real person they are. Over the next five minutes or so he speaks with respect to relationship, love and its manifestation, and the topic moves to whether men express love differently (to women).

At the 8:30 mark he speaks about how there are different ways of expressing love, based on a book he read, and from them are giving gifts, and service and spending money. It is here where we Shadeed moves on to mention the 'alpha male' (listen to mp3 audio):

Some people like to spend their money, you know they spend money and they buy things and this is usually the way that men, you know, especially alpha males, this is the way that we, because alpha males are not necessarily in tune with their emotional side... an alpha male is that lion in the pack, leader of the pack... a man's man, absolutely, Prophet Muhammad (sallallaahu alayhi wasallam) was the epitome of an alpha male, but he was from a select few of alpha men who was in touch with that emotional side...

Then in the same clip above he continues to say that the upbringing of the Prophet who lost his mother at six years old and the numerous wet nurses in his life, that this upbringing had an impact upon him going into polygyny.

Had the Prophet (sallallaahu alayhi wasallam) grown up in an environment where he had his biological mother and had a more profound connection, this maternal love, would he have even gone into polygyny the way that he has? Can we say that his upbringing had no impact or no bearing on him going into polygyny later on in his life? I would say that it did have an impact.

On the above two issues there are a number of points:

This now brings us back to Shadeed's threats in his tweets:

And upon this are a number of points:

In summary, the Prophet (sallallaahu alayhi wasallam) is free and innocent of the description of 'alpha-male' it is not befitting for him and the term itself leads to a slighting of his loftiness. Rather he should only be spoken with using terms in the Book and the Sunnah, that is most befitting. Likewise, it is not permissible to speak about the Prophet (such as in the issue of his upbringing and polygyny) in the way that non-Muslims, Orientalists, anthropologists and their likes speak, because that is speaking without knowledge, it is lying, it is speculating and it opens the door to evil.

As for Shadeed who is either happy to refer to himself as an 'alpha male' (a pseudo-scientific concept) or tries to act like one in front of his social media audience, then as we said, this concept is challenged and it is not accurate, and perhaps Shadeed will benefit from the words of Neuroscientist Dean Burnett in his article for the Guardian, 'Do Alpha Males Even Exist?'

Maybe the supposed human alpha male is a combination of disgruntled male wish fulfilment and borderline-pseudoscientific justification for resorting to bullying, intimidation and generally all-round unpleasant behaviour by men hoping to impose their will on a world they find too complex and unnerving so revert to their baser instincts to get what they want, despite knowing deep down they don't deserve it and shouldn't have it?

Shadeed is disgruntled because he was looking for celebrity status and Salafiyyah does not deal in 'celebrityship' it deals in beneficial knowledge and righteous action upon the foundation of Tawhid through a Prophetic/Salafi methodology as a means of rectifying the servant and the land and this by necessity, is a difficult, hard and long path, because the enemies or opposers of Tawhid are many, or those who deviate from it are many such as the Jahmiyyah Soofiyyah, Ashariyyah, Jabariyyah, Baatiniyyah (like the Nation of Kufr),the Ikhwanis and others, and they are out there in the field today. And also for Shadeed, the world, as it relates to al-Khalq wal-Amr (Creation and the Command) and the actions of Allaah and the wisdoms (hikam) behind them, and analysing the world through all of this, is too complex for Shadeed. It is too unnerving for him to read from Ibn Taymiyyah and Ibn al-Qayyim on these issues, and thus he reverts to baser instincts to get what he wants, as represented by pseudo-scientific babble, trying to be an alpha male.

After the Madeenah dot con conspiracy was exposed and dismantled by 2010, Shadeed came out and acknowledged that conspiracy for what it was and also acknowledged that it had Tahir Wyatt in its background in the meeting he had in Birmingham. We see in some statements he issued in 2010: 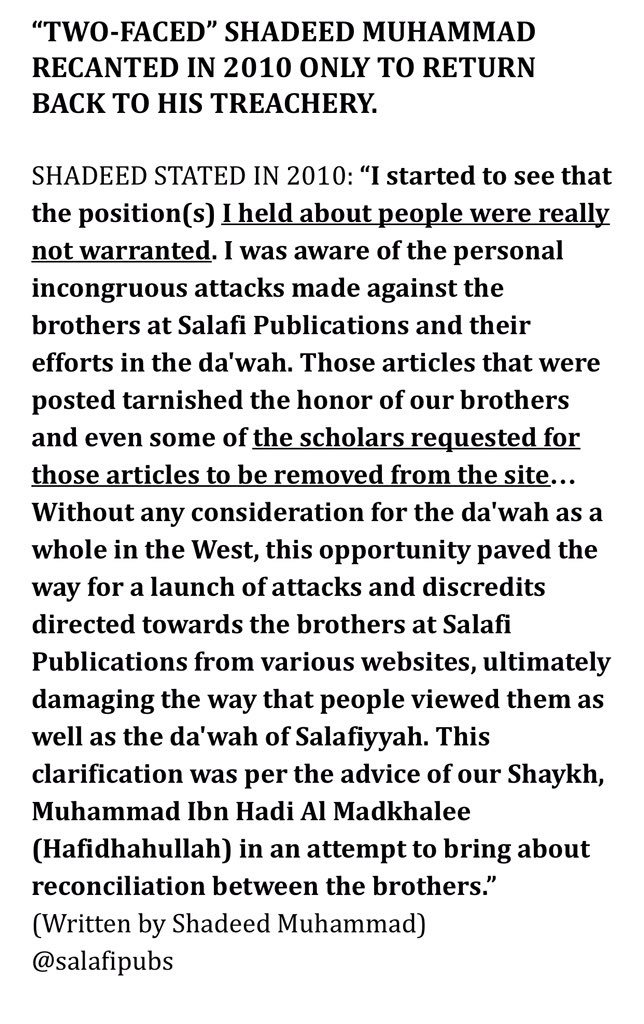 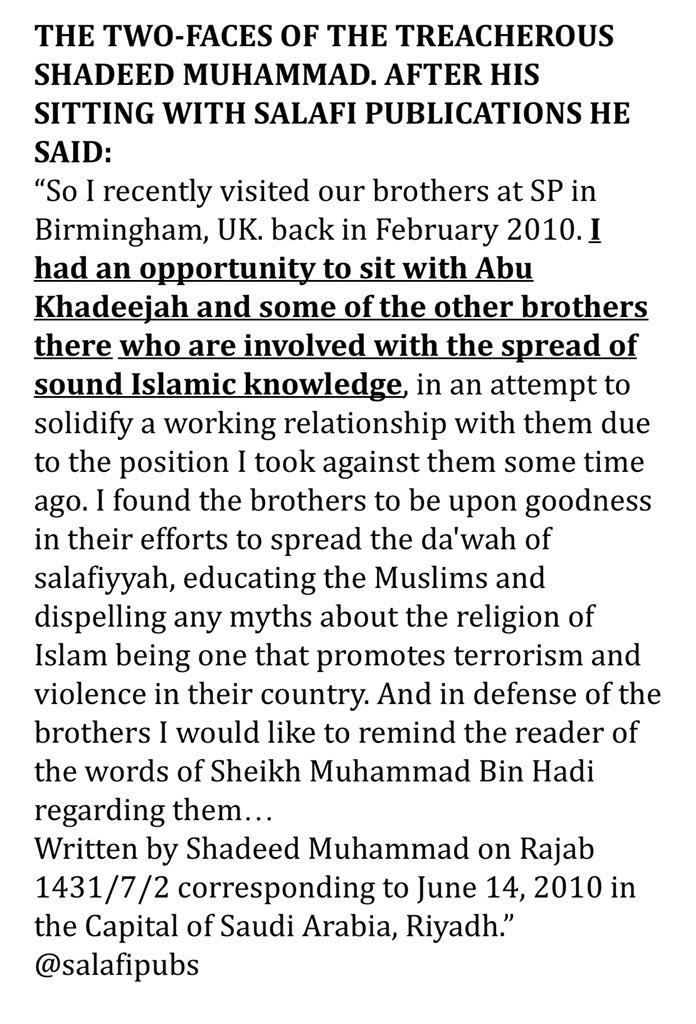 After this Shadeed thought that Salafiyyah is a vehicle for celebrityship, which it isn't. It is about beneficial knowledge and righteous action, centred around Tawhid and connecting with scholars for guidance. So he never got what he was seeking and it is after this he learned and coined his oft-repeated terms such as "validation". He began speaking, using this term, disgruntled, resentful, and went to the social sciences to find ways and means with which to intellectually vent his frustration and his resentment.

For that reason, Shadeed abandoned the methodology of the Prophets and sought celebrityship by speaking about matters common to all, to non-Muslims, to everyone, about love, family, racism, injustice, brutality and so on. And so he reads from non-Muslim authors on these subjects and then presents citations and quotes from them in his articles. This focus on these types of issues naturally draws in a lot of people, a large audience, because of their appeal and because most people do not have a good appreciation of issues of methodology and Tawhid and al-Khalq wal-Amr and so on. If you listen to Louis Farrakhan for a while on social issues and injustice, and then you listen to Shadeed Muhammad, then you will not be able to tell the difference, its the same speech. At the same time he belittles the role of Tawhid in rectifying societies, is angered that a white man should refute the Batini Kafirs of the Nation of Islam just because they are black (see here) and the one refuting is white, and he rages against those who venerate the Tawhid of the Messengers and its primary role in rectifying the servant and the land, and he retweets Louis Farrakhans's statements:

One is reminded of the trait of those mentioned in the Qur'an: "So when they turned away (deviated from the path), Allah turned their hearts (from the right path.)" (61:5).

So what has happened is that Allaah has honoured the callers to Tawhid and the callers to the Salafi creed and you can see that tawfeeq that Allaah has given in that this da'wah is growing, and there are masaajid, maraakiz, there is tremendous unity--despite the false portrayals of the haters and jealous--and all of this grieves them and this is why there is a revival of what Abd al-Razzaq al-Shayijee and Ali al-Timimi were doing in the 1990s, what Abu al-Hasan al-Ma'ribi was doing in the early 2000s and what Madeenah dot con set out to do in the mid 2000s and now, we see the same category of people coming out and using the power of social media and the tube to continue the work of al-Shayijee and al-Timimi and al-Ma'ribi and their likes, which is to defame the Salafi scholars and those who follow them upon guidance upon the true Salafi methodology.

And the outcome of all of them was not good, because of the path they took, they swerved from the path and then began to love and hate on the basis of the errant path they chose, and to use the words of Shadeed appropriately and in their proper, truthful context: Trust me, it was never gonna end well for them.

Trust me Shadeed, if you continue down this path, this is not gonna end well for you, and this is not a threat at all, it is sincere advice. Many people have passed before you in the last quarter century whom we have witnessed taking the same path as you, save that your situation is very dire and more serious, and you are nowhere near their calibre. You are studying the social sciences, then you are trying to make the Qur'an and the Sunnah fit into the ideas you are picking up and falling into crimes against knowledge, against the Companions, against the Tawhid of the Messengers. Indeed your situation is a grave one and all we can do is make du'a for you for guidance and for ourselves to be protected from the calamity that you have entered yourself into.