On page Page 5 of his article Shadeed reproduces the argument made by al-Awnee in which he claims that Aa'ishah, Talhah and al-Zubayr made a peaceful "Salafi protest" against Ali. Here are the words of al-Awni:

And here is Shadeed, plagiarising: 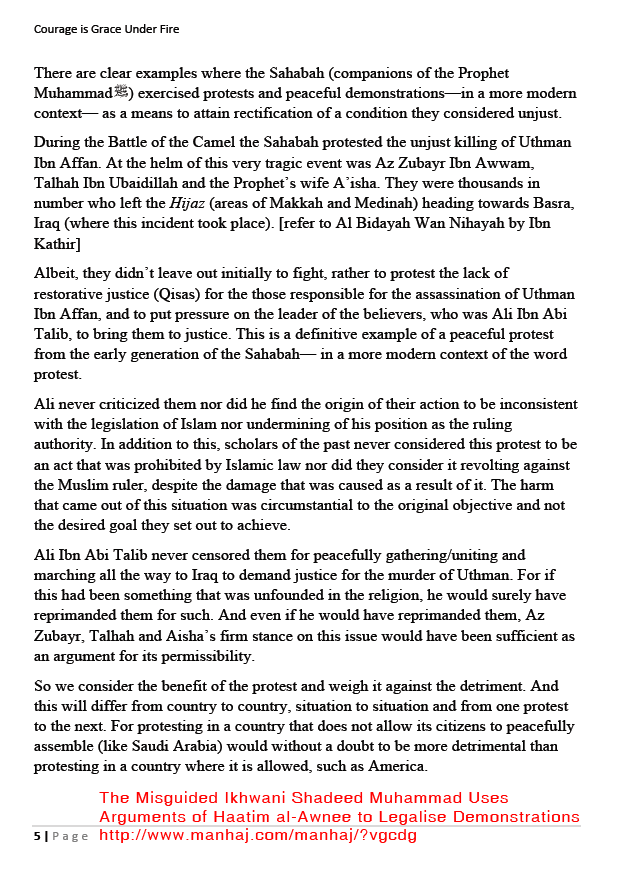 The following notes expose the lie, ignorance and desire of Shadeed, considering the fact that he knows full well the stance of the Salafi scholars regarding this topic of demonstrations (peaceful or non-peaceful) from the time of Ibn Baz and al-Albani during the 90s to the Salafi scholars of today and that they consider it a bid'ah, from the ways of the disbelievers, communists and socialists:

And this is with our knowledge that there is within the reporting in taareekh literature pertaining to the Companions and these types of events is that which is not free of the poison of the Shi'ites, because it has come through Shi'ah narrators.

TWO: In the fourth volume of Minhaj al-Sunnah (p. 316-317), Ibn Taymiyyah establishes on the basis of the reports of the historians that: 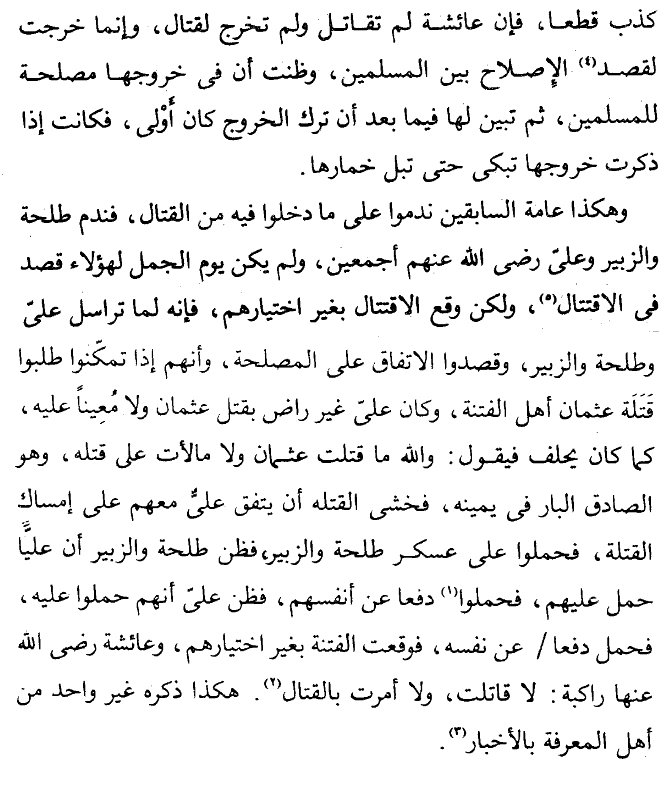 Aa'ishah did not engage in fighting and she did not leave for the purpose of fighting. Rather, she left with the intent of rectifying between the Muslims and she thought that in going out there was a benefit (maslahah) for the Muslims. Then afterwards it became clear to her that abandoning this was more befitting and whenever she would remember her going out she would cry until her khimaar was drenched with tears. Likewise, the generality of the forerunners were remorseful for what they entered into of fighting. So Talhah and Zubayr and Alee (radiyallaahu anhum ajma'een) were remorseful and none of them had any intent of fighting on the Day of Jamal. Fighting broke out without their choosing. When Alee, Talhah and Zubayr sent messages to each other (through their messengers) and they had intended agreement upon the beneficial interest, which was that when they were able, they would pursue the killers of Uthmaan, the people of tribulation...

The regret and remorse of Aa'ishah (radiyallaahu) is well reported and very clear, so how did Shadeed miss this, if we was genuinely researching the matter. The reality is that he was simply regurgitating arguments. There was no protest "in the more modern context of the word" as put by Shadeed Muhammad, rather this is a lie of Shadeed against the Companions. He means to say that the Companions went out in protest just like the protesters go out today for demanding justice, not dissimilar to the way of the Socialists, through marches and demonstrations.

THREE: The situation was that Alee was in Madeenah where the situation was delicate after the assassination of Uthmaan. Talhah and Zubayr set out to pursue the killers in Iraq on their own volition from Mecca. And Aa'ishah set out in order to rectify between the parties, to get them together so that they can pursue the killers collectively, as that would be better. She believed that her status as the Wife of the Prophet with tremendous respect would make all those concerned to come together. However, this was an erroneous ijtihaad and those Companions who pursued the killers and preceded Alee in that, they realised their error afterwards and were remorseful. And as for Alee, he was correct. The truth was with him and his ijtihaad was correct. As for Talhah and Zubayr, they desired the truth but erred in ijtihaad. And as for Aa'ishah she acted upon the Qur'an (4:114): "No good is there in much of their private conversation, except for those who enjoin charity or that which is right or conciliation between people. And whoever does that seeking means to the approval of Allah - then We are going to give him a great reward." This is made abundantly clear in the reports in the various books of taareekh.

There was no demonstration against Alee, this is a lie against those Companions. This is in fact used by the Raafidah to instigate enmity against Aa'ishah (radiyallaahu anhaa) and make it appear she was in revolt against Alee (radiyallaaahu anhu). If only Shadeed had not opened this evil door, look at where jahl and hawaa and disdain of the Salafi methodology and its carriers leads you to! The Raafidah accuse Aa'ishah (radiyallaahu anhaa) of fisq and kufr because she went out in revolt against Alee as they claim and here is Shadeed Muhammad attributing to her what he calls a "peaceful protest" or to use the words of John F. Kennedy whom Shadeed quoted right at the beginning of his article, a "peaceful revolution" - the outcome of which we know was violence and killing due to the action of the Saba'ite Kharijites. So the Raafidah can say that due to her "peaceful protest" (in the "modern context of the word" as Shadeed puts it), there was bloodshed and killing, and they can use this to revile the Mother of the Believers from an angle besides the one that they use (which is that she embarked on a forbidden journey and led war against Ali). Shaykh Ubayd was right against this Ikhwaani deviant, that he is "daall, mudill", a misguided strayer who misguides others, (mp3 audio).

FOUR: Imaam al-Albaani, in al-Silsilah al-Saheehah (no. 474, 1/854) explains that Aa'ishah (radiyallaahu anhaa) was mistaken and that there is no escape from attributing error to one of the two parties, either Alee or Talhah, Zubayr and Aa'ishah. He says that there are clear evidences that Aa'ishah (radiyallaahu anhaa) was in error and from them is that she herself was remorseful, and this is a sign also that her error was forgiven [because it was an ijtihaad on the basis of the verse (4:114) and she wanted to make islaah between the parties]. 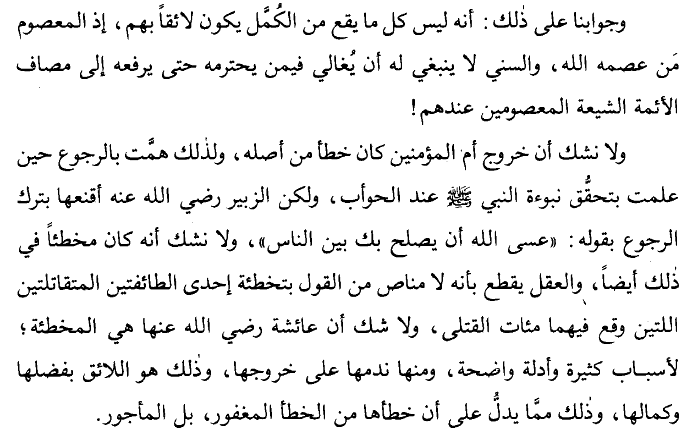 So how can Shadeed use this action as an argument, when those who engaged in it realised they were wrong and then showed remorse for it?

FIVE: And Ibn al-Arabi al-Maalikee in Ahkaam al-Quraan (3/369-370) defends Aa'ishah (radiyallaahu anhaa) from the revilement of the Raafidah: 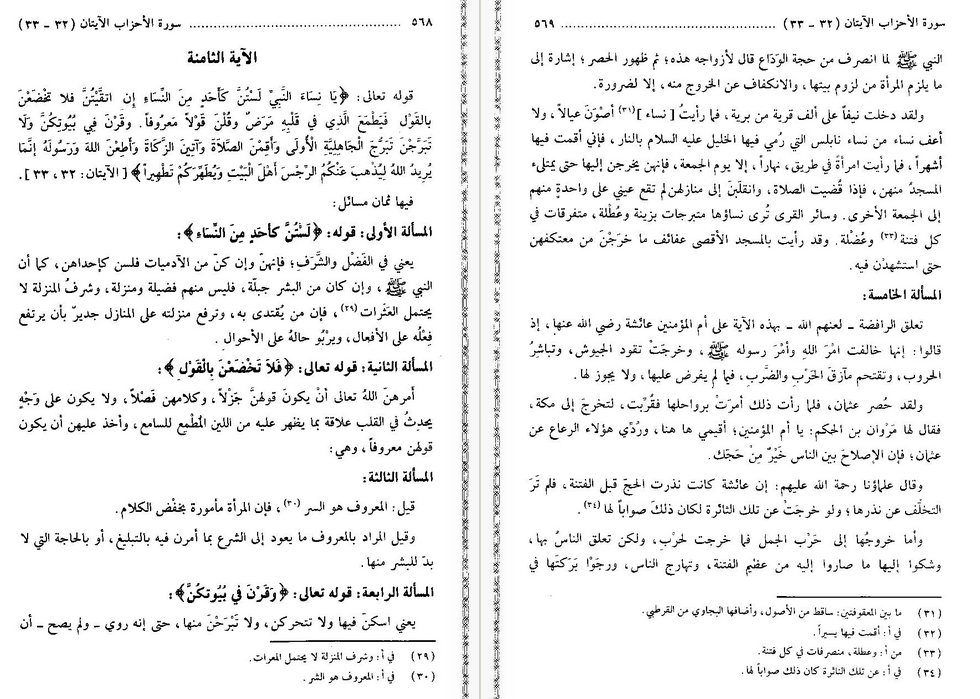 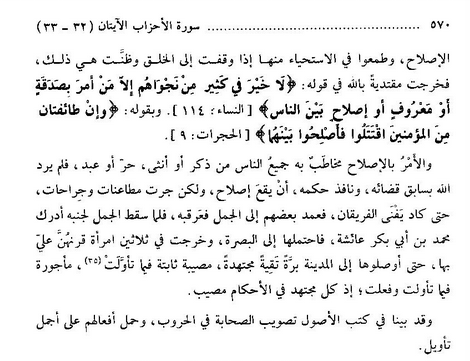 He explains that the Raafidah claim that on the basis of (Quran 33:32-33) Aa'ishah disobeyed Allaah by leaving the house and going on a forbidden, sinful journey by leading others into battle against Alee, as they claim. And He explains that the Scholars of Ahl al-Sunnah respond that due to the tribulations that took place, the people came to her and hoped for her blessing in bringing about islaah. So on the basis of (4:114) and (49:9) [which command islaah between believers] - with respect to what was taking place, she went out for islaah. And this is a refutation by Ahl al-Sunnah against the Raafidah, that they correctly explain that Aa'ishah went out for islaah.

And as for Shadeed Muhammad, he claims that Aa'ishah (radiyallaahu anhaa) went out in order to demonstrate and protest against Alee, to put pressure upon him, a viewpoint that supports the Raafidah in their lies.

As for Ahl al-Sunnah, they say that the ijtihaad is rewarded but it was a mistake and that the truth was with Alee (radiyallaahu anhu). The pursuit of the killers should have been under his command all along and not isolated and in separation, for he was agreed upon the necessity of pursuing the killers and was eager to pursue them as well, but he had more far-sighted vision and was aware of the best way to do it effectively.

So why does Shadeed argue for bid'ah in the religion on the basis of erroneous ijtihaads of a very small minority of the Companions (upon whom he lies and fabricates at the same time) and abandon the consensus of the remaining majority, the senior among the Companions, and this same bid'ah he is arguing for is one that gives ammunition to the Raafidah to speak ill of the Wife of the Prophet, Aa'isha (radiyallaahu anhaa)?

The answer is that when you turn your back on the Salafi methodology and from the Salafi scholars and follow your desires, you will stumble and fumble in misguidance and misguide others, whilst thinking you are smart and enlightened. Shadeed Muhammad is "daall, mudill", a misguided strayer who misguides others, (mp3 audio).! May Allaah protect us from trials.